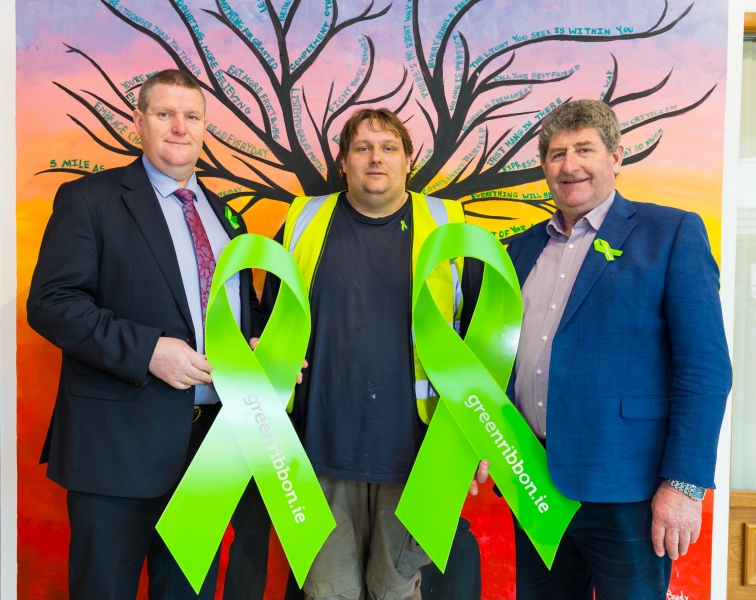 For the month of May, See Change Ambassador James O’ Connor in conjunction with Tullamore & District Chamber of Commerce wants Tullamore to play its part in ending the stigma surrounding Mental Health issues and asks that the people of Tullamore come together to help make this happen.

Chamber President Anne Starling along with James O'Connor and fellow members John Cusack and John Mollin will distribute over 7,000 free Green Ribbons to local businesses over the coming days and are asking that the business community comes together to support the campaign by asking their staff to wear a Green Ribbon for the month of May and to post a picture on Social Media using the hashtags #GreenRibbonIRL and #TullamoreGoesGreen.

Research released by See Change ahead of the campaign shows that 1 in 5 people still associate derogatory language with mental health difficulties.

“One of the most important ways in which we can reduce stigma is to change how we talk about mental health”, says John Saunders, Director of See Change.

He continues, “Stigma often prevents people seeking help and speaking out. After last year’s campaign, 3 in 4 people said they were open to discussing mental health. We hope to improve upon this”.

Concluding, Mr Saunders says, “It’s wonderful to see local initiatives and businesses in Tullamore participating in the Green Ribbon campaign to encourage positive conversations about mental health in their own county.”

Speaking about his experience local man and See Change Ambassador James O’ Connor said, “In my younger years I experienced some very serious mental health issues, I shared my story on social media because there was too many young people around me dying by suicide and I thought that maybe if they knew my story they would have seen that you can come out the other side of it okay and lead a positive and healthy life. The response to my story was overwhelming and the amount of people that contacted me and shared their own stories was unbelievable, however many of them had never told anyone else about their struggles and this saddened me and lead me to become an Ambassador for See Change in the hopes that I could play a small part in opening up the conversation around mental health and show people that it is something that affects us all and should be spoken about openly and without shame or embarrassment”

The Green Ribbon campaign aims to end mental health stigma by prompting hundreds of events and thousands of conversations all over Ireland during the month of May each year. The campaign will launch on Thursday 3rd May at 11am in the Mansion House, Dublin.

Between now and the end of May 500,000 ribbons will be distributed to homes, workplaces, schools, colleges and communities all over Ireland to encourage people to talk about mental health.

Green Ribbons will be available for free in many local businesses and we encourage members of the public to pick one up and post a picture on Social Media using the hashtags #GreenRibbonIRL and #TullamoreGoesGreen.

See Change is a national partnership working to end mental health stigma in Ireland. The partnership is made up of over 100 organisations and 60 ambassadors who work to create a disruptive, community driven social movement to reduce the stigma and discrimination associated with mental health problems.

Our vision is an Ireland where every person can be open and positive about their own and others mental health. For more information, check out www.seechange.ie