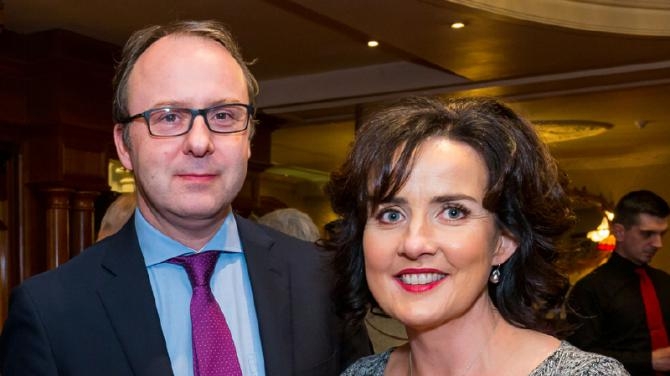 PROMOTING a positive image of Tullamore and enhancing the town’s green credentials are the twin aims of the new local Chamber of Commerce chief.

A member of the Chamber Executive for the past five years, Roger is deeply immersed in the organisation’s work as the voice of business in Tullamore and its hinterland.

He and his wife Barbara [nee O’Connell] are the duo behind Dolan’s Pharmacy, which operates two outlets in the Offaly capital, on William St and in the Bridge Shopping Centre.

A resident of Tullamore since the last 1970s, Roger completed a BComm in University College Dublin from where he graduated in 1991.

Like many of his peers in those pre-Celtic Tiger days the young graduate emigrated and pursued careers abroad in computing and business consulting across a broad range of industries including utilities, manufacturing, banking and insurance.

With a wide range of experience under his belt, the new President returned to Tullamore in 2000 though he continued to work in Dublin and abroad until 2005.

“At that stage our first child arrived and it made sense to be at home and I have been a shopkeeper with my wife, Barbara in Dolan’s Pharmacy since,” outlined Roger.

As well as serving on the Chamber Executive for the past half decade, Roger has been a member of the finance and communication sub-committees.

He has also looked after legalisation of export documentation and the QUIDS shopping voucher scheme, an initiative that has grown considerably in popularity particularly in the past 12 months.

Tullamore Chamber is in rude good health with a record membership, two members of staff and an office in the Bridge Centre, sponsored by one of the organisation’s founder members, Christy Maye.

“I’ve read that organisations such as ours are similar to the fire brigade . . . you call them when there is a fire and send them away immediately when it is out,” he outlined.

Added the new President: “We often get asked ‘what is the Chamber doing about this or that’ . . . but in reality it’s our members who can do more for us than we can for them because together we have the biggest pool of connections, experiences and skills.”

“For the last few years we’ve had a theme of ‘working together’ and this has generated some really positive outcomes through partnerships with the Gardai, Offaly County Council, Tullamore Tidy Towns, the Offaly Local Development Company and Tullamore Rotary Club to name a few.”

On his aim of promoting a positive image of Tullamore, the Chamber chief says he plans to do this “with consistent messages easily communicated and understood by all.”

“It’s about building the story of Tullamore and how we distinguish ourselves from our peers,” he emphasised.

The new President explained: “We’ve spent some time on this already and understand our different audiences – investor, employer, job-applicant and relocating family. While it’s important to be prepared for the international company seeking a site, in reality many firms have two or three open positions at any one time and so attracting skilled, semi-skilled or general staff from large urban areas is a quality of life issue.”

And in keeping with the current zeitgeist, Roger plans to emphasise the area’s green and sustainability credentials during his two years at the helm.

“We have an opportunity to really create a distinction here and make ourselves attractive to foreign firms. It is perhaps only a matter of time before a green cert will be required in addition to a tax cert to do public business.”

He added that “renewables create a tremendous opportunity for job creation, especially in rural communities.”

“One thing to consider is if we had the highest density of electric car charging points [in the country] how we could exploit that,” speculated the Chamber President.

One of the biggest challenges on the horizon facing business throughout the country is Brexit and the form it will eventually take.

“In general multi-national companies are well prepared while the indigenous firms are more exposed with the agri-food sector the most exposed,” he outlined.

“It became obvious as March 29 approached that UK companies, especially distributors, were focussed on their own market stockpiling to the detriment of the Irish market,” revealed the local business man.

He added: “It is a concern that the impact of standards and labelling might not be fully appreciated at firm level. So, in the past, you might be ordering from your distributor in the UK while at a point in the future you may be importing into the EU and be legally responsible for standards, labelling and compliance overnight”

The new Chamber President stressed that the delays associated with Britain’s departure from the European Union had created an unexpected opportunity for Irish firms to get organised.

“To avoid any trading delays I would urge importers to get an EORI number from Revenue and similarly exporters to register with the Chamber of Commerce for Certificates or Origin,” he pointed out.

Since he assumed the role of President, the Chamber has entered into pilot initiative with Skillsnet Ireland - the national agency responsible for the promotion of workforce learning in the State, with over 60 networks supporting in excess of 15,000 companies.

“This pilot scheme is a valuable learning experience, suitable for anyone who wants to build their overall awareness of cybersecurity so they can avoid the obvious pitfalls and help prevent being caught by cybersecurity breaches, phoney emails etc.,” Roger explained.

The courses are aimed at business owners, managers and management teams and their employees.

The first course took place on Wednesday, May 8 last, in the Bridge House and the importance of the event was signified by the attendance of Garda Crime Prevention Officer, Graham Kavanagh.

The roll out continues and the next course takes place on Friday, June 7 commencing at 9am and concluding at 1pm To book a place contact the Chamber office at info @ tullamorechamber.com or 057 9323698. Alternatively , you can book your place directly at tullamorechamber.eventrbrite.ie

Roger is adamant that the Chamber has a role to play in “building the skills and talent databases in the Tullamore region and identifying the local talent pool and gaps in it.”

He is also proud of the role the Chamber has played in Tullamore and its hinterland since it was established in the late 1970s and hopes his term of office will see further consolidation of its role as the voice of business locally.

But it’s not all work and Roger, in his spare time, likes to play a “bit of golf” and swim.

And he reveals one of his main occupations in his off-time is “taxi driver to my four children.”