News
Home » News » Offaly ranks 19th in Income Tax League tables – would or should people in the region pay more? 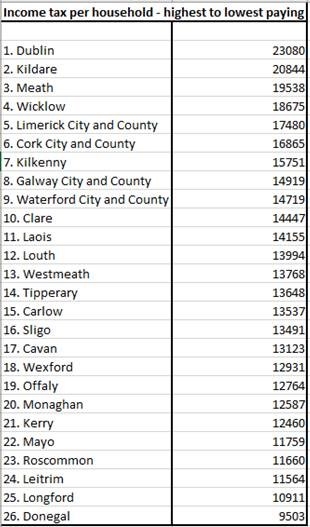 Offaly ranks 19th in Income Tax League tables – would or should people in the region pay more?

As a nation we would broadly be in favour of the introduction of a Wealth Tax, as evidenced by the results of the latest instalment of the Taxback.com Taxpayer Sentiment Survey Series 2018 (Appendix 1 below). The leading tax refund specialists asked 1,700 taxpayers throughout the country for their views on taxing public wealth.

The survey uncovered that a “landslide” 65% agreed a new tax on accumulated wealth should be imposed. 61% of respondents concurred that a new higher ‘third’ rate of Income Tax should be introduced to gather additional taxes from those on larger incomes.

“I’m sure many people will be surprised that support for a wealth tax amongst taxpayers is so high. After all, 65% pretty much constitutes a landslide. However, the results come with a caveat; when asked if they themselves would be prepared to pay more tax if it resulted in better public services 72% said they wouldn’t – either because they think they pay enough already or they think that it won’t result in better public services. The most recent statistics from CSO show that in terms of the average working household, the estimated average tax paid per household in Offaly 1 year (2015) was €12,764. My sense would be that most of these households believe that they contribute enough already.”

When asked which assets should be taxed – and how often the tax should be due – a strong majority of the Taxback.com survey respondents favoured taxing land (69%), property (57%) and shares (56%), with 61% in favour of imposing a wealth tax on an annual basis. There was little support for further taxes on pensions (14%) or more personal items like cars (26%) and jewellery (16%).

To Flanagan the message the survey is delivering is crystal clear – “Tax the rich”.

“The recent increase in property prices has meant that those who are on the ladder are seeing their net worth grow by 11% a year. In 2015, statistics from economist David McWilliams revealed that wealth is highly concentrated in this country – with 73% of the country’s wealth is owned by the most affluent 20%. It doesn’t matter if it’s those with high income or those with accumulated wealth that have already been taxed – our survey has indicated that two thirds of people want to tax it again.

Balancing that, the top 1% of earners paid almost 25% of the income tax collected. The top 6% of income earners – those households with income over €100,000 per year - paid a staggering €11 billion in income tax in 2017. This figure is over half of the record high total of €22 Billion that was collected.

These statistics were included in the preamble to the survey, which may have influenced people to slightly favour a wealth tax over a third income tax rate.”

Taxback.com report that in the Revenue’s annual Ready Reckoner for 2017, it was estimated that introducing a third rate of tax would generate an extra €140 million per percentage point – so a top rate of 45% would mean an extra €800 million for the Government coffers.

But those in power might balk at the idea of another income tax, given that Government policy is to reduce income taxes to avoid ’taxing work’, they may see the introduction of a Wealth Tax as being more palatable to the public.

Quite how much this new Wealth Tax would reap would depend on the level of the tax. In the survey, taxpayers were found to favour a rate of between 1-5%. However, this rate would be considered very high by international standards, with those countries who have Wealth Taxes tending towards an annual charge of less than 1%”.

“Anything in excess of 1% may lead to a ‘flight of capital’,” warned Flanagan.

Experts at Taxback.com say that whether a tax on the wealthy will ever actually come to fruition in Ireland remains to be seen. Last year the former Minister for Finance, Michael Noonan, said in the Dáil,

“In order to estimate the potential revenue from a wealth tax, it is necessary to identify the wealth held by individuals. As there is currently no such wealth tax in operation in Ireland, the Department understands that the Revenue Commissioners have no basis or requirement to compile the data needed to produce estimates in relation to a potential wealth tax.”

Mr Flanagan concluded “Perhaps it’s time we started this debate in earnest and start to compile the data”.