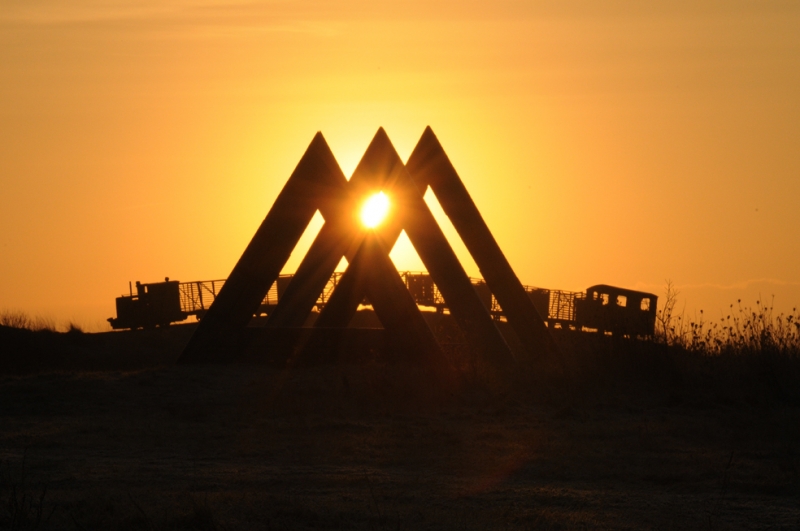 Step into the wilderness

Transformed from its previous incarnation as a commercial bog where peat was harvested to heat homes around the country, today Lough Boora Discovery Park is home to countless species of birds and wildlife, fish-filled lakes and a permanent exhibition of huge outdoor sculptures. These sculptures give the park an other-worldly feel, created using the old industrial materials of the bog such as locomotives, rail-line and timber, all crafted into magnificent works of art.

The park is in a continuous state of flux depending on the season. Birds depart or arrive, breed and rear their young. Plants flower and fungi appear and disappear, while the resident animals go about their lives. Leave all traces of urban-living behind as you hop on your bike and cycle around the wide open spaces of Lough Boora bog and sculpture park. Watch out for fast-moving hares that skip across the paths as you cycle by and don’t forget to stop-off at one of the many bird-hides for a glimpse of our feathered-friends up close and personal. There’s also 4 lakes in this 2,000 hectare site of cutaway bog, now a nature-lovers’ paradise. We promise you’ll feel free as a bird in Offaly’s own big sky wilderness.

The raised bogs of the Midlands of Ireland evolved after the last Ice Age, around 15,000 years ago. Mesolithic people wandered through Ireland and one of the most important Mesolithic sites in Ireland is at Lough Boora.  Two sites were excavated in 1977.  You can visit the site of the ancient settlement by following the Mesolithic Route.

Kick-off your Lough Boora adventure at the Visitor Centre and rent bikes for the whole family. Bicycles for all ages are available to hire in Lough Boora and offer another way for you to enjoy the Mesolithic, Farmland and Turraun Cycle Routes. Use a solo or tandem bike to explore 22km of trails, winding through the park’s lakes, wetlands and species grasslands. Start from the new Visitor Centre and cycle around the Grey Partridge Conservation Area, stopping for a rest at one of the park’s bird hides or a picnic at the Pavilion.

Lough Boora Discovery Park offers trails ranging from a short stroll to longer treks to take you through a diverse range of amenities. All routes start and end at the Visitor Centre, with a level walking landscape that can be enjoyed by all age groups. There are 50km of paths in the Parklands ranging in length from a short stroll to the 15.8km Turraun Route. The varying sights, sounds and smells ensure a walk through Lough Boora always has something new, exciting and interesting to offer.

Lough Boora Discovery Park is home to some of the most innovative land and environmental sculptures in Ireland. The artists, inspired by the rich natural and industrial legacy of the bog lands, have created a series of large-scale sculptures that are now part of the park’s permanent collection. As a paradise for outdoor enthusiasts interested in its unique flora and wildlife, the Sculpture Park’s route is enhanced by 24 innovative works of art that dramatically change the landscape with varying contrast depending on the weather, throughout the seasons and over time. Industrial materials of the bog, such as locomotives, rail line, timber and stone have been developed into magnificent sculptures.

As areas of Lough Boora came out of commercial peat production, a number of still water fishing lakes were developed as both local and tourist amenities. Most of the lakes do not have a closed season but best results can be achieved between the months of April and October.